Cassini’s journey to explore Saturn and its Moons began on October 15th, 1997. The spacecraft was launched from Cape Canaveral aboard the U.S. Air Force Titan IVB/Centaur rocket and is now considered to be one of the most successful space missions ever undertaken.

However, it wasn’t easy as the project did encounter two major challenges prior to the spacecraft launch – funding and protests. By 1994 Cassini’s development had a $3.3 billion price tag and some critics perceived this is overly high for the mission. The project also took some heat from groups such as Grandmothers for Peace and environmentalists claiming that if something goes wrong with the mission, the plutonium on the spacecraft could cause a threat to our planet. To put things into perspective, the Cassini probe had 72 tons of plutonium – the most ever rocketed into space, it’s understandable that people were a bit anxious. However, some called the project stupid and denounced NASA’s efforts to explore space, others went even further and filed a legal challenge shortly before the launch.

These concerns didn’t go unnoticed and NASA released documents, detailing the mission’s flyby and the agency’s methodology of protecting the planet. NASA even revealed the heat tests performed on the spacecraft’s thermoelectric generators and also got a green light from the US Department of Energy. Sadly, the controversy continued even after the launch. After all, science denial dates back to 1633 when Galileo had to recant his claims that the Earth moves around the Sun – And yet it moves, as you would often hear today.

After the launch, Cassini didn’t head straight to Saturn, rather it went past several planets – Venus, Earth and Jupiter, to get a speed boost. Cassini received two gravitational boosts from Venus and took seven years to reach Saturn. On July 1st, 2004, Cassini settled into orbit around Saturn. The probe’s primary objectives were to explore and further understand Saturn’s rings and look for more satellites. It did so much more than that. Cassini ended up exploring an entire miniature planetary system.

Saturn has 62 moons with confirmed orbits. Can you imagine being on a planet with so many moons in the sky? Me neither. I am not going to talk about each of the moons, however I’ve selected the few that interests me most.

Say Hello to Phoebe, a bit quirky, but magical in its own way. Phoebe is the largest outermost satellite of Saturn and captures scientists’ imagination for two reasons – its orbit is in the opposite direction, also known as retrograde, and it was formed elsewhere in the Solar System and caught later on, by Saturn’s gravitational pull. Phoebe seems to be one of the most compositionally diverse objects in our Solar System, however, astronomers cannot say for certain where the moon originally formed.

On 24th December 2004, Cassini released the Huygens lander toward Titan, Saturn’s largest Moon. There are so many things that are fascinating about Titan. From its nitrogen-dominated atmosphere, methane lakes and oceans, to its Earth-like features, almost any description seems unfinished. What interests me most is that Titan’s surface seems to be decoupled from the rest of the moon. When astronomers studied Titan’s rotation, they discovered that the surface shifted by 30 km, contrary to what their calculations predicted. Further studies suggested that the rotation of Titan’s surface isn’t entirely synchronized with the rest of the Moon, which means that the frozen crust is separated from the interior, floating on a global ocean.

Enceladus is one of the places in our Solar System that is most likely to sustain life. Although scientists haven’t detected life as of yet, the primary ingredients are there. Life as we know it requires liquid water, source of energy, carbon, hydrogen, nitrogen, oxygen, phosphorus and sulphur. Cassini has found nearly all these elements on Enceladus, with the exception of phosphorus and sulphur, but scientists suspect them to be there. It could be that Enceladus is simply too young to have undergone life- creating processes. What’s even more fascinating is that jets of icy particles from that ocean gush out at around 800 miles per hour into space. These eruptions appear to supply material to Saturn’s E-ring and are coming from a vast liquid ocean beneath Enceladus’s icy crust. How did the scientists know for certain that there is a global ocean present? They collected gravitational data and discovered a slight wobble, as the Moon orbits Saturn. Essentially, Saturn rocks Enceladus back and forth as it rotates. If the surface was more rigid, the observed wobble will be far smaller, proving that there must be a global layer of liquid water diving the surface from the Moon’s core. The reasons why Enceladus’ ocean hasn’t frozen yet remain a mystery.

Iapetus is the third largest satellite of Saturn. You may not find it very impressive, because of its odd shape and rocky surface, but this moon has a magic of its own. The yin and yang of Saturn Moons has one dark and one bright side, which helped to hide the satellite for a very long time. A number of theories seek to explain the striking contrast in colouration. Putting the alien conspiracies aside, scientists first believed particles from Phoebe may fall on the dark side of the moon. However, because of its slow rotation, 79 days, the moon has warm daytime surface temperature and cold nighttime temperature. The dark surfaces absorb more heat compared to their icy counterparts and have more time to warm. This heat causes ice material to vaporise and retreat to colder regions. This process causes the dark material to become even darker and neighbouring bright regions to become even brighter. Another interesting fact is that Iapetus’s equatorial ridge contains peaks that reach upwards to 12 miles high, making it one of the tallest mountains in our Solar System. In comparison, Moun Everest is a little over 5.5  miles.

No matter how fabulous the planet’s moons are, Saturn and its rings dominate the stage. Besides the thousands of magnificent photos Cassini took of this ringed world, the probe provided scientists with insights into Saturn’s rings, storms and magnetic field.

For example, the spacecraft discovered that Saturn’s rings are actually millions, rather than thousands. They are not simply a static band of dust but have a life of their own. 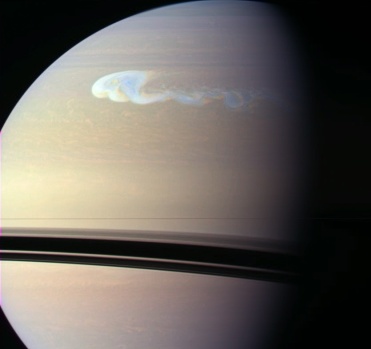 Cassini also witnessed equinox on Saturn, which is a pretty big deal because it happens every 15 years. This gave Cassini the unique opportunity to study the rings in new lighting conditions and monitor seasonal changes. Speaking about that, in 2010, Cassini detected a storm that is eight times the size of Earth’s surface area. Images from the probe show the storm making its way through Saturn’s northern hemisphere, covering close to 2 billion square miles with ten lighting strikes per second. This shows how rapidly weather changes on Saturn and how shifting seasons can dramatically influence the weather conditions on the planet.

In 20 years, Cassini travelled 4.9 billion miles, completed 294 orbits and 162 flybys around Saturn’s moons, took 453, 048 images, collected 635 GB of data, which resulted in 3, 948 published scientific papers and brought together 27 nations to participate in this historic mission.

Cassini’s last encounter with Titan is referred to as The Goodbye Kiss because it provided a gravitational boost that sent the spacecraft into lower orbit and toward its death dive in Saturn’s upper atmosphere. The final plunge into Saturn was designed to protect Enceladus and Titan, potentially habitable moons, from the small chance of spreading Earth microbes when colliding with the surface. Why was it necessary? Cassini was running out of fuel, and once the spacecraft was out of fuel, mission engineers wouldn’t be able to control it. As the spacecraft plunged through Saturn’s rings on September 15th, it faithfully transmitted more data about the planet’s gravity, magnetic fields, and how much material is in the majestic rings. Cassini couldn’t get too close to Saturn at the beginning of its mission because it was too dangerous. This was the type of bold adventure that could only be undertaken at the end of a mission.

Everything that has a beginning has an inevitable end. I can’t even begin to imagine how scientists and engineers, who had devoted their lives to this mission, felt on the day Cassini fell silent. Despite being incredibly proud, did they feel sad, grateful, relieved, perhaps happy that it’s over?

I believe this mission represents the best of humanity. Our relentless strive to discover and understand will always bring us together and will help us overcome obstacles along the way. As we voyage across space to further worlds, all is left to do, is preserve and cherish our little blue planet even more, as it truly is, one in a million.

Feast your eyes on some of Cassini’s best photographs 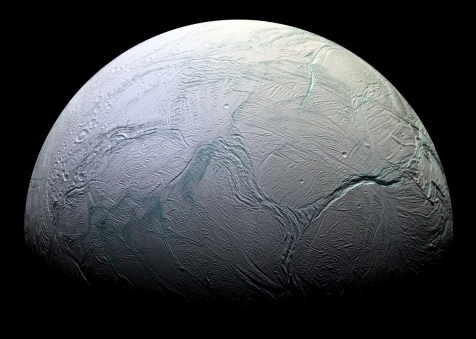 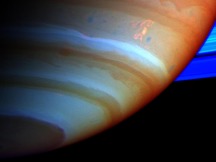 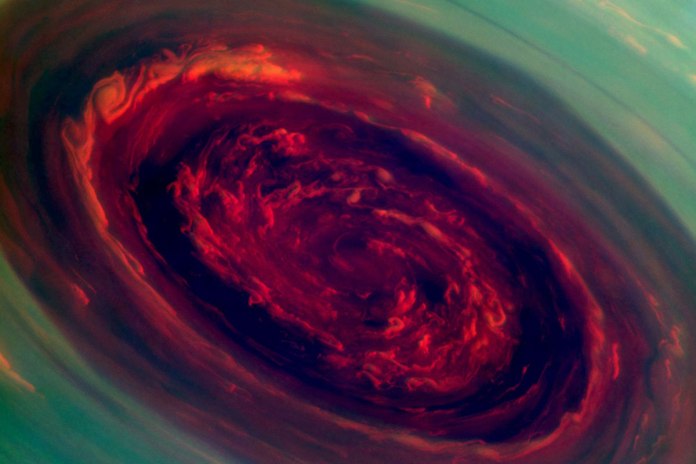