That’s one small step for a man. One giant leap for mankind.
– Neil Armstrong

Till this day, Neil Armstrong’s words continue to echo in time, reminding us of how far we have come and how far we have yet to go. His step was physical, the leap was imaginary, and somehow it feels that we all took it with him. We had finally put a human being on the Moon.

The Apollo program (1963 – 1972) meant a lot to a large group of people. It was designed to land humans successfully on the Moon and bring them safely back home. It was also designed to outperform the Soviet Union in the Space Race during the Cold War.

The Apollo project employed nearly half a million people, required the support of almost 200, 000 industrial firms and universities, had a price tag of $25.4 billion, and returned almost 400kg of lunar samples. Unfortunately, I think that after the first Moon landing, people lost interest in the project. However, every manned lunar-landing mission had different objectives, which brought us closer to understanding the history of Earth’s satellite. The project also had a huge influence on technology development and played a crucial role in computers, telecommunications, and avionics.

Apollo 11 – Not only was the Apollo 11 mission a great success, but also a win for the United States in the Space Race with Russia. The primary objective of the mission was to achieve the goal set by President John F. Kennedy in 1961 – land a man on the Moon. Apollo 11 launched from Cape Kennedy on 16th July 1969 and four days later it achieved its purpose. You may have heard the phrase The Eagle landed, it refers to the lunar module of the Apollo 11 mission. Commander Neil Armstrong and Lunar Module Pilot Edwin “Buzz” Aldrin landed in the Sea of Tranquillity and spent almost 22 hours on the lunar surface. In the meanwhile, aboard the Command Module Columbia, pilot Michael Collins continued circling the Moon until 21st July, when Armstrong and Aldrin joined him to leave the lunar orbit. The crew left medallions bearing the names of the astronauts who lost their lives in the Apollo 1 fire. I don’t think there could have been a better way to honour their memory.

Apollo 12, the second manned mission to the Moon, launched on 14th November 1969 and included an extensive series of lunar exploration tasks. The crew had to land the Lunar Module within walking distance of the Surveyor III spacecraft in order to take instruments back to Earth for examination. The astronauts were also tasked to take photographs of potential exploration sites. At first sight, there is nothing exciting about this mission. However, it is important to say that the Apollo 12 astronauts showed that a precision lunar landing with the Apollo system was possible, which enabled the targeted landings that followed. This is what the Apollo project was about, each mission contributed in some way to the next one.

Apollo 13 – “Houston, we’ve had a problem here.” If you happen to have watched the 1995 space docudrama with Tom Hanks and liked it, congratulations, you have a good taste in films (according to my humble opinion of course). For the ones who haven’t seen the film, Apollo 13 was meant to be the third attempt to put humans on the Moon, but the mission was aborted due to an explosion on board. The mission objective was to land in the Fra Mauro area, take photographs and explore the lunar surface. However, this was not meant to be. On April 13th, 1970, the crew members were 200, 000 miles from Earth when their second oxygen tank blew up. At this moment, the command module’s supply of electricity, water and light was lost. Things spiralled from then on and shortly after the explosion, the astronauts could see oxygen venting out of the spacecraft. After evaluation, they decided to use the Lunar Module as a lifeboat. The LM, originally designed to land on the Moon and provide an operating base for the astronauts on the surface, was built for only 45-hour lifetime, and it needed to get stretched to 90. Power, water and removal of carbon dioxide were also concerns, as the LM wasn’t designed to support three men for four days. Back on Earth,  Houston engineers faced the task of rewriting and testing new procedures and trying to find a way to safely return the astronauts back home. And they did.

Apollo 13 didn’t land on the Moon but it was classified as a successful failure despite that, both because NASA managed to successfully return the crew back home and because of the gained experience in rescuing them.

Apollo 14 launched on a nine-day mission on 31st January 1971. It was the third to land on the Moon and the last of the H-missions (targeted landing with a two-day stay on the lunar surface). Compared to the last two missions, Apollo 14 list of objectives seems quite extensive. The astronauts had to explore the Fra Maura region, conduct lunar field geology investigations, deploy scientific instruments, photograph deepspace phenomena, carry out tests to determine reflective properties of the lunar surface and much more.

The mission had a few “bumps in the road” – the command service module has difficulties docking with the LM, the lunar module’s landing radar failed to lock onto the moon’s surface and send accurate information about altitude and vertical descent speed. The crew also experienced communication problems and had to delay the first EVA with almost an hour. However, despite all that, the astronauts stayed optimistic and completed the mission’s objectives. Shepard and Mitchell spent almost 34 hours on the Moon and collected 94 pounds of rocks, which were later on distributed to 187 scientific teams in the US.

Apollo 15 was the fourth mission to land a man on the Moon and it was important for two reasons – it was the most scientifically in-depth and ambitious mission of the Apollo Project, and was the first to use a four-wheeled rover vehicle. The objectives were to explore the Hadley-Apennine region, set up experiments, conduct lunar orbital experiments and take photographs of the lunar surface. As I was reading Falling to Earth, by Al Worden, I learned of the rigorous training and preparation the astronauts went through to make sure they are safe and make the most of their time on the Moon. The exploration and geological experiments were carried out by Commander David Scott and Lunar Module Pilot James Irwin. The astronauts spent more than 18 hours on the lunar surface and travelled 17 miles in the Lunar Rover, which was by the way designed by The Boeing and tested by General Motors. They also collected 76.6 kgs of interesting rocks. In the meanwhile, Alfred Worden conducted observation on board the orbital module.

On 7th August 1971, Al Worden became the first human to take a spacewalk in deep space at about 200 000 miles away from Earth when he retrieved film cassettes from cameras on the spacecraft. The walk, which lasted about 16 minutes, earned him two Guinness World Records: for the first spacewalk in deep space and for the most isolated that any human has been from another person.

I had the privilege of meeting Al Worden very recently and even got a signed copy of his Falling to Earth Book, for which I am over the Moon with (pun fully intended). 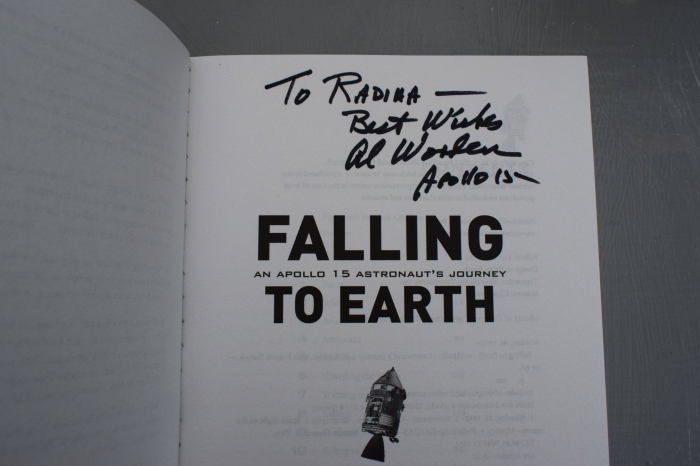 In a lot of ways, the Apollo 15 mission was considered a great success. The astronauts collected the necessary data and carried out the agreed experiments, the mission’s objectives were accomplished.

Apollo 16 – This mission’s objective was to explore the Descartes region on the Moon, perform experiments on the surface and take photographs from lunar orbit. The location was chosen to allow the astronauts to collect older lunar material, than the samples from the other mission and it didn’t disappoint. The crew successfully landed in the central lunar highlights in on 21st April 1972. The astronauts stayed on the lunar surface for 71 hours and conducted three EVAs (extravehicular activities) totalling about 21 hours. As part of their geology objectives, the astronauts collected 731 individual rock and soil samples,  which later on proved that the Moon has been bombarded by countless meteorites. This turned out to be a big surprise, as scientists previously thought that this region was covered by volcanic plains.

Apollo 17 launched on the 7th of December 1972 and was the final mission of the Apollo program. Among the mission’s objectives were geological surveying, conducting surface and in-flight experiments. The landing site, Taurus-Littrow highlands, was chosen because it was believed it contained rocks both younger and older, than the ones found on previous missions. Crewed by Commander Eugene A. Cernan, Command Module Pilot Ronald E. Evans and Lunar Module Pilot Harrison P. Schmitt, the Apollo 17 mission was the first to include a scientist – Geologist Harrison Schmitt. The Apollo 17 astronauts spent almost 75 hours on the lunar surface, travelled the most with the lunar rover, approximately 35km and hold the record for the longest lunar surface EVAs – 22 hours and 6 minutes.

Eugene Cernan was the eleventh and last Apollo astronaut to walk on the lunar surface. We haven’t been back to the Moon in over forty years, but I hope one day we will. 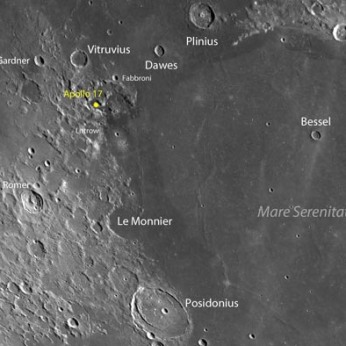 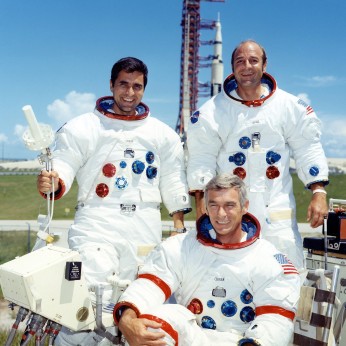 4 thoughts on “The Apollo Program”